Why don’t they stop?

We hope this forum will be a valuable source of information, we want it to reduce people’s sense of isolation and to give them a sense of hope for the future.

When partners and family members call the Stop It Now! helpline they have many questions, but the ‘why?’ questions are the ones that they most want answers to – ‘why did he do it? and ‘why didn’t he stop?’ There are many reasons why people choose to view sexual images of children on the internet and we know that it is not something that ‘just happens’. Having started, most people who look at the images of children find it increasing difficult to break the habit and stop – even though many want to.

Many people who have called the Stop It Now! helpline because they have been arrested, cautioned or sentenced for Internet offences against children report how, on many occasions, they tried to stop viewing sexual images. Some go as far as destroying their computers, only to purchase another some weeks or months later, when the urge to look at images becomes too strong to resist. If they are unable to talk to anyone else about their behaviour and if they are not caught, it is likely to become habitual because the process becomes self-reinforcing; many describe it as ‘addictive’, in a similar way to becoming dependent on adult pornography, or on online gambling, or alcohol consumption.

The Cycle of Online Sexual Offending

For some people, online activities such as gaming, viewing adult pornography and viewing indecent images can provide a welcome escape from the pressures of the ‘real’ world, tempting some to spend more and more time online and perhaps leading them to withdraw from family and friends.

In addition, an escape that reliably provides pleasure can become addictive.

The Cycle of Online Offending Model shows how the process of online offending becomes self-reinforcing, to the extent that many people describe it as an addiction.

An example: Mark is having problems coping with stress at work (lifestyle problem), after a particularly bad day he comes home late and argues with his partner about the hours he is spending at the office. He feels really upset and angry that his work is affecting his family life (emotional trigger). He doesn’t know how to deal with the problem, he needs to work to earn money and is not very confident he could find another job. Instead of thinking about this problem he wants to feel better so decides to look at pornography. He is bored of looking at adult pornography and sees a link offering younger models so thinks he will have a look. Mark gets pleasure from looking at the images and forgets about his stress for a few hours.

After he closes his computer Mark feels guilty as he knew that the pictures were of children but to make himself feel better says to himself that actually he wasn’t causing harm because the images were there and that the children looked happy so they weren’t being harmed. 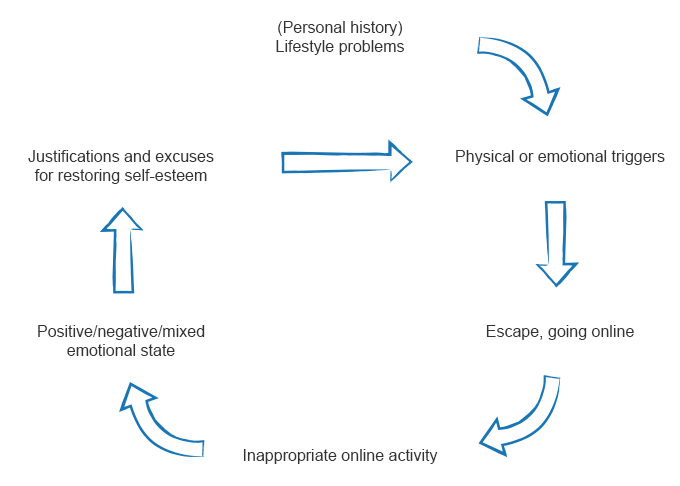 The next time Mark feels stressed/upset he remembers that looking at the images online made him feel better and helped him forget about his problems so he starts to look more often.

Soon this behaviour becomes a habit and Mark’s way of coping with any problems. The more time he spends online the worse his relationship with his partner becomes and the more guilty he feels about what he is doing. Mark does not know how to cope so uses the images more and more.

Hopefully this example helps you understand how people start using the images and how sometimes they feel they are trapped and unable to stop. Without help it is hard for anyone to change a behaviour and people who access sexual images of children often feel unable to get help as they know the behaviour is illegal.

The link below provides information about addictive and compulsive behaviours, including motivations for the behaviour and the difficulties and emotions that people are trying to escape by taking part in inappropriate online activities. It also includes techniques that can be used to manage urges to go online to view sexual images.

Fantasy (something that is imagined) also plays a significant role in the cycle of online offending. Everyone has fantasies and these are often about perfectly appropriate things, such as what you would do if you won the lottery! Everybody will have their own reasons for engaging in a fantasy…..

Fantasies can be a healthy and ‘normal’ part of everyday life and everybody fantasises about something at one point or another.

However, fantasies can become a problem when:

Can you help us?

We are looking for feedback to improve the effectiveness of our work and this website. To let us know your thoughts, please fill in our survey.