Click to escape
Home » Concerned about the behaviour of another adult? » Sexual thoughts or behaviour towards children » Why might someone continue to have sexual thoughts about a child?

Why might someone continue to have sexual thoughts about a child?

When partners and family members call the Stop it Now! Helpline they have many questions, but the ‘why?’ questions are the ones that they most want answers to – ‘why does he have sexual thoughts about children? ‘why didn’t he stop having them?’ and ‘why did he act on them?’…….

There are many possible reasons why people have sexual thoughts about children and/or go on to commit sexual offences against a child. Fantasies can be about a variety of different things and everybody will have their own reasons for engaging in a fantasy. However, we know that sexual offences are not something that ‘just happen’ on the spur of the moment. They involve a combination of triggers, thoughts, feelings, behaviour and decisions made within the context of wider lifestyle issues and situations.

Attempting to stop thoughts or behaviour

Often people who are troubled by their sexual thoughts or behaviour regarding children frequently report how, on many occasions, they have tried to stop these thoughts and change their behaviour. For some individuals it is harder than others. Our experience tells us that this is possible for some people. Much depends on the individuals perception e.g. whether their thoughts and behaviour are something which they are concerned about, and the nature and strength of the problem, including how long it has persisted and whether it exists alongside age-appropriate sexual interests.

However some individuals who have an exclusive sexual interest in children are likely to struggle to stop having sexual thoughts about them. Encouraging these individuals to modify their thinking and replace sexual thoughts and fantasy with ones that involve adults may be almost impossible if they have no sexual interest in adults.  The focus would instead be on encouraging the development of appropriate self-management and coping strategies which are designed to help individuals manage the non-sexual thoughts and feelings likely to accompany this sexual attraction, alongside reducing any potential risk of offending.

For individuals who have age appropriate sexual thoughts and interests there are a range of strategies which relate to both thinking and behaviour which can be implemented with the aim of reducing both the frequency and intensity of the sexual fantasies and diminishing any risk of acting on them.

The strength of sexual fantasies

Sexual fantasies can be very powerful for some people and they may serve a number of purposes including sexual gratification. Some individuals describe using sexual fantasy as a form of escapism from boredom or other negative feelings such as loneliness and sadness. Others use it to avoid problems or to plan and rehearse the things they would like to do.

Fantasy can have both positive and negative outcomes but is often associated with an attempt to secure positive results including feeling better, albeit many individuals describe this as being short lived. You can find more information about the function of sexual fantasy on the Fantasy section in the anonymous user part of this site. This section demonstrates that thoughts and fantasies are often associated with a desire to secure both emotional and sexual needs, which are likely to continue in the absence of more appropriate ways of securing such needs. They can also be triggered by external stimulus or triggers which individuals may have little control of e.g. a sight or sound they did not anticipate or plan. All these factors combine to make thoughts and fantasies powerful and sometimes difficult to manage, especially if they have become persistent and repetitive.

The majority of people who engage in sexually harmful behaviour have a cycle or pattern of behaviour which is repeated – sometimes the behaviour can become habitual. Here is an example of an offence cycle: 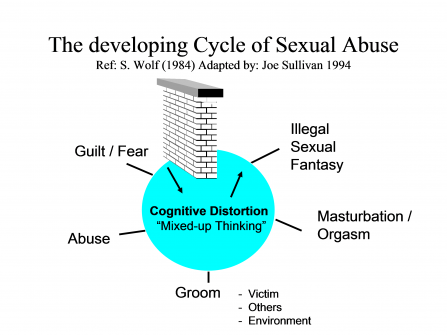 Understanding the cycle or pattern of behaviour, and the link between thoughts, feelings and behaviour, may in part explain why some people continue to have sexual thoughts and fantasies and why others may act on these thoughts and commit a sexual offence.

Cognitive distortions are influential in reinforcing the cycle as they usually serve to minimise and justify the behaviour before, during and after it has occurred. Below is an example:

George is having problems coping with stress at work (lifestyle problem). After a particularly bad day (trigger event) he comes home late, drinks a number of glasses of wine and argues with his partner about the hours he is spending at the office. He feels upset and angry that his work is affecting his relationship and family life (emotional trigger). George doesn’t know how to deal with the problem as he needs to work to earn money and is not very confident he would find another job. Instead of focussing on finding a solution to this problem he drinks more and thinks about what he can do to feel better. He begins to daydream and imagine situations in which he feels good (fantasy). This includes thinking of teenage girls in swimsuits. George gets pleasure when having these thoughts and it allows him to forget his problems for a while. He masturbates while having these thoughts. George feels guilty and uncomfortable about his thoughts but he tells himself that thoughts which occur in his head don’t actually cause any harm because he would never act on them (cognitive distortion).

So returning to George….

George continues to feel stress and pressure at work (emotional trigger). His relationship with his partner is becoming increasingly strained. They are arguing more and his partner is avoiding coming home by staying out late with friends and family (opportunity). George’s drinking (physical trigger) has increased and he is having more sexual thoughts about children (fantasy). His fantasies are becoming more detailed and he regularly masturbates when fantasising. George reads a newspaper article about someone who has been accessing indecent images of children (trigger). He already occasionally looks at adult pornography (lifestyle issue) and is curious about what these images of children involve and how they are different from legal pornography. He decides to go online and look for images on modelling sites and Face book. George tells himself that as these are legitimate sites and the images are self-generated he is not doing any harm in looking at them (cognitive distortion).

Hopefully this example demonstrates how sexual thoughts and fantasies can influence behaviour and how the offence cycle can maintain the behaviour, and sometimes lead to the development of other potentially more serious behaviour. Once the cycle has developed and is repeated individuals can feel they are trapped and find it very difficult to stop. Without help it is hard for anyone to change behaviour and people who have sexual thoughts about children often feel unable to tell other people about what they are thinking, especially if they have acted on these thoughts as George did.