This summer Rhys Jenkins, record-breaking ultrarunner, took on his biggest challenge to date to raise vital funds for our Stop It Now! helpline and campaign.

Rhys tackled the monumental challenge of running from John O’Groats to Land’s End, whilst also summiting the three highest peaks in the UK. Not only was Rhys able to complete this incredible run in a world record-breaking 23 days, 7 hours and 19 minutes but he has also raised over £8,000 to support our work.

We spoke to Rhys just after he completed the challenge to find out what motivated him, what was the hardest part he had to overcome, and if he’s got his eye on any other records.

What made you want to take on this monumental challenge?

Running the length of the UK has been a challenge on my bucket list for as long as I can remember and when the opportunity presented itself, I just had to take it.

What was the most difficult part of the challenge?

Apart from the running and summiting the peaks, I have to say the most difficult part of the challenge for me was the endless amount of traffic hurtling towards me! I’d say 80% of the time I was running, I had to dodge cars and lorries on very narrow country lanes.

What kept you motivated? 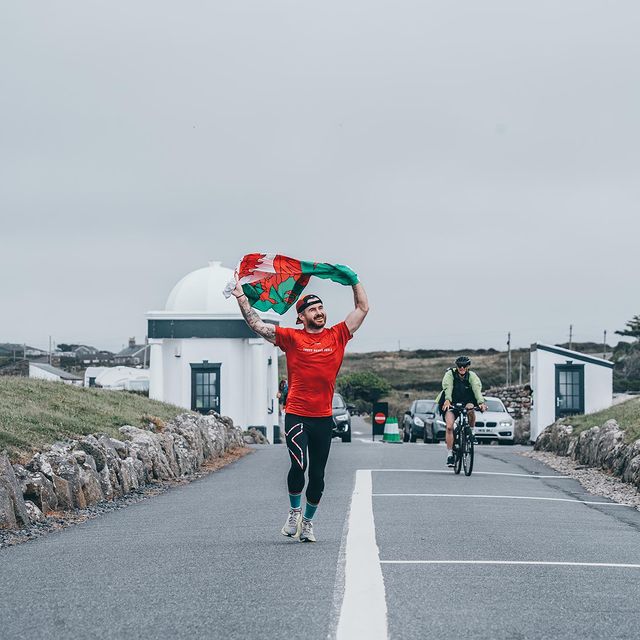 How did it feel when you reached Land’s End?

It was pretty surreal. All those days spent thinking about it and when you get there it is a bitter-sweet moment because you don’t want the adventure to end but you are so pumped because you’ve finally achieved your goal.

It’s also always such an amazing feeling to have Cerys standing there to welcome me over the finish line.

Why did you choose Stop It Now! to fundraise for?

As a child, Cerys, my wife was abused by a family member and as a couple, we want to help in the fight to prevent child abuse. It is something that lives and thrives in the dark and if we can bring it forward into the light, talk about it more and make it less of a taboo subject then surely that will help to prevent harm and protect more children.

As a survivor, Cerys researched a number of child sexual abuse charities, and Stop It Now! was the only one attempting to stop child abuse before it happened. It’s a cause we both believe in and wanted to help.

What have you got planned next?

We have our first child arriving in November and all focus is on that right now. But for 2022 there is a big old list of challenges!

Including, Badwater 135, Leadville 100, Keys 100, The ONER, West Highland Way, and an attempt at the fastest known time for the Cambrian Way. It’s going to be a very busy year indeed!

A huge thank you from everyone at Stop It Now! for the remarkable effort from Rhys and his wife Cerys, who supported him along the way. If you would like to help Rhys reach his target of £10,000, please donate on his fundraising page.

Our confidential child sexual abuse prevention helpline (0808 1000 900) is available for anyone with concerns about child sexual abuse. Callers do not need to give identifying information, so can remain anonymous. We speak to thousands of people every year and help them to protect children and young people from sexual abuse. We can also arrange for you to speak to someone in Welsh if you would prefer.