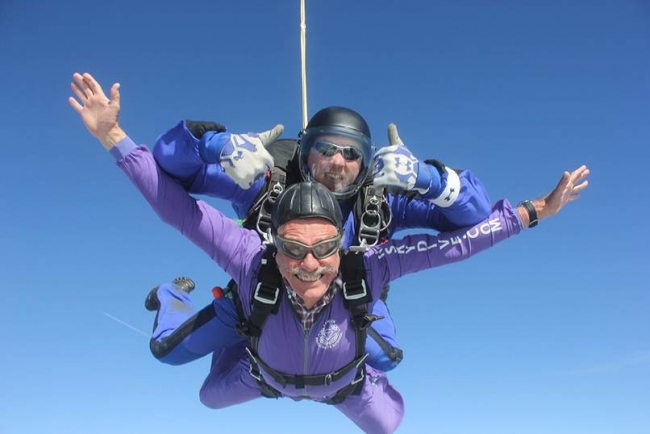 Semi-retired electronic design engineer, Bruce Piggot, decided to leap into the unknown to raise money for The Lucy Faithfull Foundation, the only UK-wide charity focused solely on preventing child sexual abuse. Bruce chose the charity because he has witnessed first-hand the terrible impact of child sexual abuse on the lives of people close to him.

Bruce was joined for the tandem sky-dive by his daughter, Meisha. The 29 year old from Hemel Hempstead is no stranger to extreme sports. As well as working as a fitness trainer, Meisha spends some of her spare time working as a stunt double in action films.

Skydiving from 10,000 feet for the first time would be a daunting challenge for anyone, including people far younger than Bruce. But the 74 year old found the whole day, and the jump itself, an exhilarating experience:

“The jump was incredible, one of the most exciting things I’ve ever done. We had to wait a long time before boarding the plane. But the adrenalin was pumping as the time approached to jump. Nothing quite prepares you for doing anything so counter-intuitive as shuffling towards the open door of an aeroplane at 10,000 feet. And then suddenly you’re out there, freefalling for 30 seconds at 130 mph. The noise as you fall is deafening, and then the ‘chute opens and everything goes quiet. It was fantastic to look out over the landscape on a clear, beautiful afternoon as we descended for five minutes back to terra firma. It’s something I’ll never forget. In fact, I can remember every second of it, vividly – whereas I couldn’t tell you what I had for breakfast this morning!”